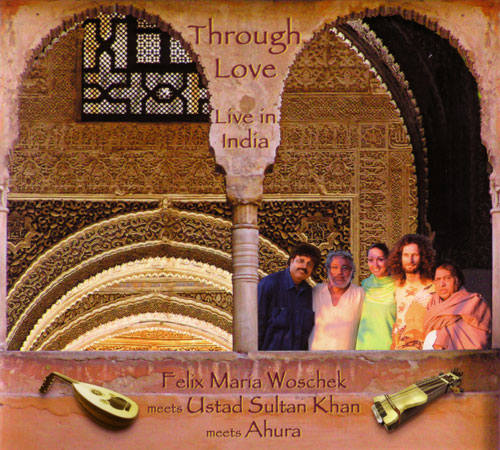 Through Love - Live In India

Through Love – Live in India

In Autumn 2004 my friend Mohammad Eghbal invited me to spent Christmas with him and his wife Christa in Goa so we had time enough to sit together and play music, which is always a great delight for us but unfortunately we rarely find the time to do so.
On my way to Goa I had the luck to spend some days with my beloved brother Sultan Khan in Mumbay.

Since I know Sultan and Mohammad it has been my wish to sit with them together, knowing that some divine music would be the result. How delighted I was when Sultan agreed to visit us in Goa to play with us.

As I had expected the connection between Mohammad and Sultan was of immediate and sincere warmth. We all felt that we are connected through the same spirit of love and devotion to the ONE GOD. No wonder that singing and playing together catapulted us into another dimension of existence.

While we have been in bliss the news of the Tsunami hit us hard and we have been concerned like anybody else being so close to the catastrophe. Initially we should play some concerts in Madras and Auroville but because of the chaotic circumstances after the floods the concerts were cancelled.

Some days later Sultan Khan called me from Bombay inviting us to be part of his Sufi-concert at the international Mumbay Festival and to play another charity concert for the victims of the Tsunami.

We have been very excited with the prospect to perform with Sultan Khan and all the other Sufi-musicians coming from Rajasthan to join us.

When we arrived in our hotel in Mumbay we heard that there should be only one rehearsal shortly before the concert. In the afternoon somebody knocked at my door and some people from Rajasthan just walked into the room, introduced themselves as musicians from Khan Sahibs group. Carpets were spread on the floor and after half an hour the room was filled with at least twenty people, including Ustad Sultan Khan and his son Sabir, his younger brother Niyaz Khan and many other members of his family.

In Europe you could not even imagine to have so many people in one little hotel-room, especially not for a concert rehearsal but in India things are little different. And here we found us in the middle of these great musicians, the pulsating tabla rhythm of the Kawali-songs brought us into trance and we could not believe that this happened as we played along. My sister Christa suddenly pinched me in the arm and whispered in my ear whether this was true. Finally it was true and later we found us on stage in front of the Gate of India, it was all an unbelievable scenery and made a deep impression on us.

The most touching thing was how loving and supporting Sultan Khan was to all of us. It was truly a blessing to share this with him and all the musicians. The atmosphere was filled with warmth and respect. We all felt that we were brought together from different parts of the world through a higher force – to unite in the spirit of understanding beyond religion, culture and race and yet being connected to all that our ancestors brought to us.

And finally – after 25 years of singing the holy songs of different traditions in order to create peace and understanding – I felt that my vision was coming true with the help of this wonderful people. This idea of overcoming separation through devotional music was what drew Sultan Khan almost 15 years ago towards me.

He himself said:
„… I have been exceedingly fortunate in my short career in having absorbed music from musicians of high caliber of various styles and from different backgrounds. All of this music is constantly with me in my conscious and also in my subconscious mind. Under these circumstances I consider it my obligation to the future generation to put my stamp by attempting to amalgamate the various styles in order that it be appreciated by a wider audience not just in India but also abroad, not just of one religion, but of several. For example, the great Saint of India, Kabir, was above the two main religions Hindu and Muslim. He did not need to refer to God as Bhagawan or Allah, but yet both the Hindus and the Muslims understood his references to God. I therefore take his bani (his sayings), put them to music and thus further the intention of Kabir Ji himself.

In such compositions I may incorporate a little jazz rhythm, a little classical phrase, a little Rajasthani color or a little bit of cello for example. We now live in a smaller world that was not open to my predecessors, who had not performed abroad. Indeed, some musicians barely made it cross their own state. So my attempt at contemporary music is to recognize the reality that I perform in New York, a Jazz musician comes to India and a great soul like Nusrat Fateh Ali Khan swayed musically , not only his own world of the Muslims, but the world at large.

It is very common in our tradition to perform a raga mala, which means a garland of ragas. Historically it is believed that raga mala was composed by the teacher to increase the ability of the student to recognize the different ragas, which changed at lightning speed and then back into the main raga. So now in the twenty first century it is my duty to do the same to all kinds of music. I firmly believe that there are twelve notes of music and it does not matter whether the origin of music is German, French, Indian, Persian or Chinese. What is important is the “color” that is produced by different nationalities. So in contemporary music I also like to put in a little color of my native Rajasthan, of Punjab etc.

In conclusion I would like to say that I want to be a true follower of our Virasat (culture-heritage) by recognizing and respecting the traditions of the past and perpetuating the same respectfully by adding strains of music from various parts of India and abroad.”

(taken from an interview with Sultan Khan by B. Malhi and Jaspal Randhawa in 2004)

I decided to release these extraordinary recordings because it is our testimony and it is so different to all the polished studio productions that you normally listen to. I recorded everything with my little Apple Power Book while I myself was playing and so the sound quality is appropriate to the circumstances with all disturbing noises that you have normally in India.

I wish that you can feel the spirit that spoke through all of us while we performed this music and appreciate the “live atmosphere” which takes you with us on a trip of spiritual ecstasy.

I dedicate this album to all the great souls that have walked the path before us and transferred their spirit on us, above all Djellalledin Rumi, Kabir and finally to my beloved brothers Sultan and Mohammad who keep their teachings alive.

May all beings be happy
OM Shanti – Salam – Shalom

Have a look at my live videos from India